Right now I was supposed to be in Scandinavia for a big family trip to celebrate my mom's 70th birthday this year. We might try to go in August, or it might be next year, who knows. I'm not sure when I'll next be headed abroad and saying hello from here. Like for all of us, Coronavirus has really thrown a wrench in life. But I'm so grateful to be safe and healthy and with my family during these crazy times.

And I'm staying very busy with all kinds of projects, two of which I wanted to share.

First, I've posted some of the crafty things I make on an Etsy site called "LindseyCrafting." You can see everything here, and if you're on Etsy and willing to give my shop a "heart," that would be fantastic. There's paintings, knitting projects, quilting projects, earrings, and more.

Also, I have a piece of travel writing that was just published in the latest issue of Yellow Arrow Journal, which is available in pdf or printed copy here.

This fall, I'll also have pieces of writing published in the Shanghai Literary Review and The Finger Literary Journal, so look out for those as well if you'd like.

Hope you're well, and hope to see you here again before too long.

Exactly one week after we'd boarded the NBP and left Palmer, most of us got off the vessel... 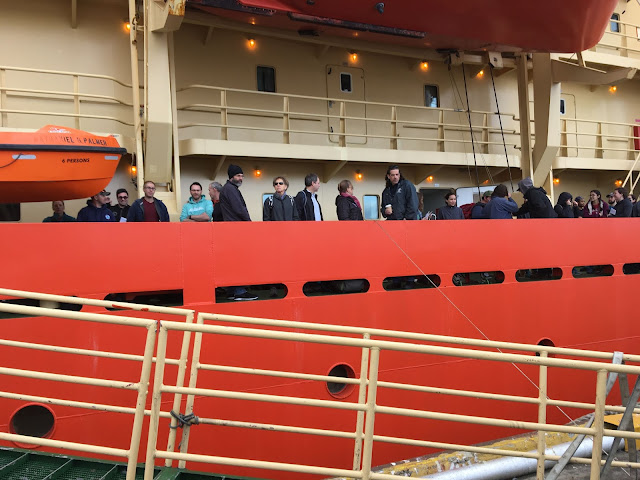 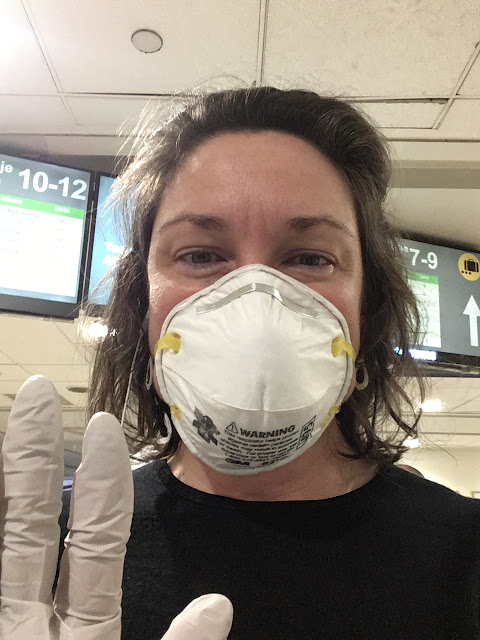 Punta Arenas to Santiago (where the check-in area was essentially empty, which would have felt incredibly eerie but for the cheerful pop music playing over terminal speakers)... 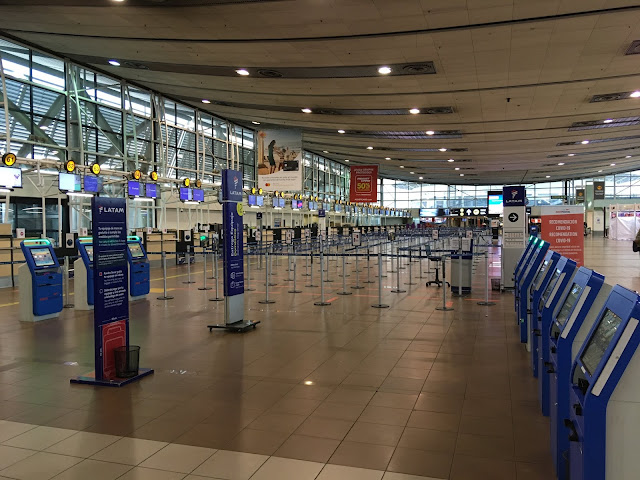 ...and where nearly every flight except ours to Miami was cancelled. 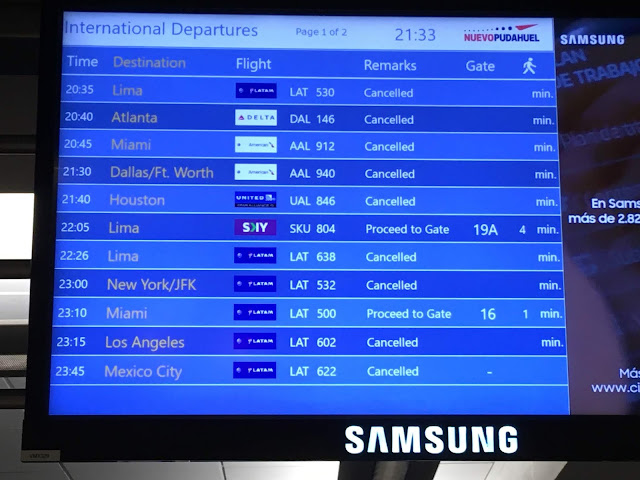 Things were not any better in Miami, of course... 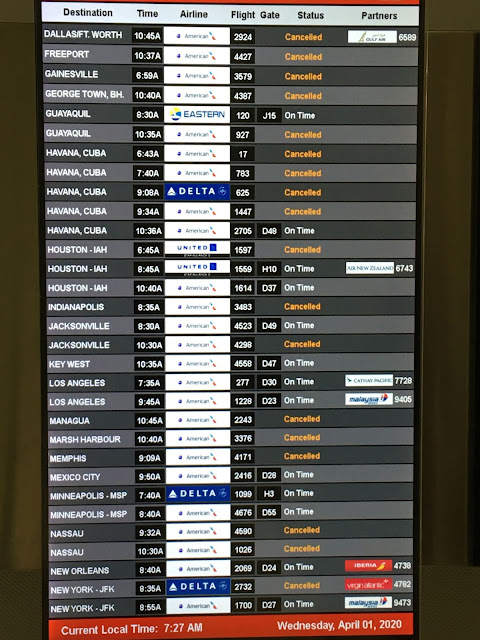 ...and my domestic flights to Charlotte and then Milwaukee were both almost completely empty. 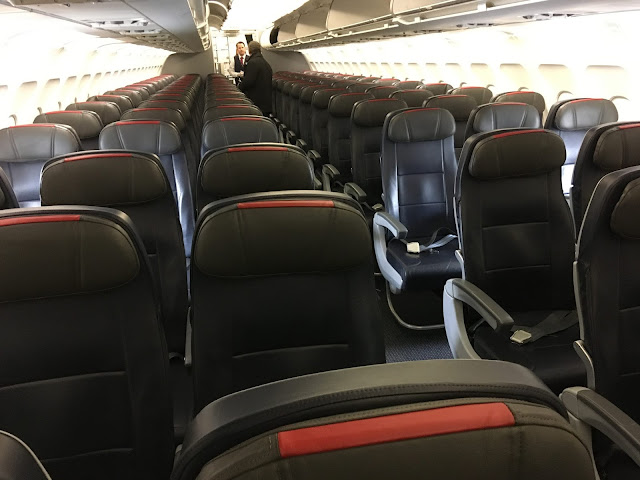 Given that and the deepening disruption, illness, stress, and hardship going on in the world, it felt so lucky and amazing to even be getting home.

Which I did, about 9 days after leaving Palmer. I am now happily snugged into my parents' house in Wisconsin (while they are hunkered down in Arizona) doing my two week quarantine and looking forward to spending quality time with my sister and her kids. Hopefully, sooner than later, I'll be able to widen that circle to seeing and spending time with more friends and family. But of course it remains to be seen how long it will be until that is possible. In the meantime, I am well and content and have everything I need (and more). Who knows when I'll next be able to travel outside the U.S. But whenever I do, I'll see you here! Stay safe and healthy, everyone!

On Tuesday 3/24, the RVIB Nathaniel B Palmer arrived to Palmer Station. Well, as close as it could safely get! 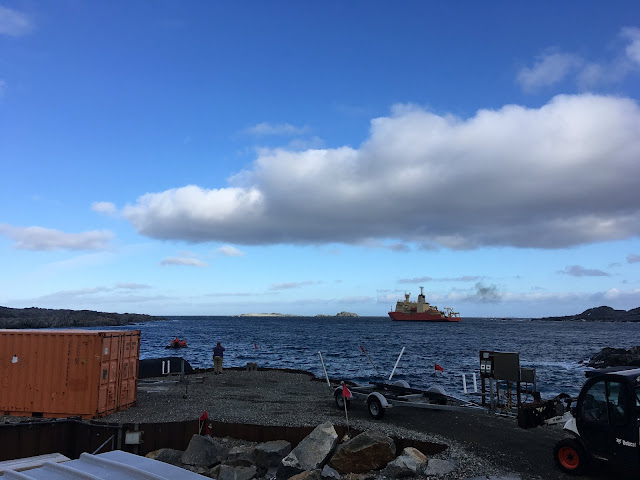 In a few chaotic hours, we used a station zodiac to get all the cargo we needed to get on board, say way too many goodbyes, and move the 11 of us who were leaving station on board. Shockingly quickly, I was seeing Palmer from afar... 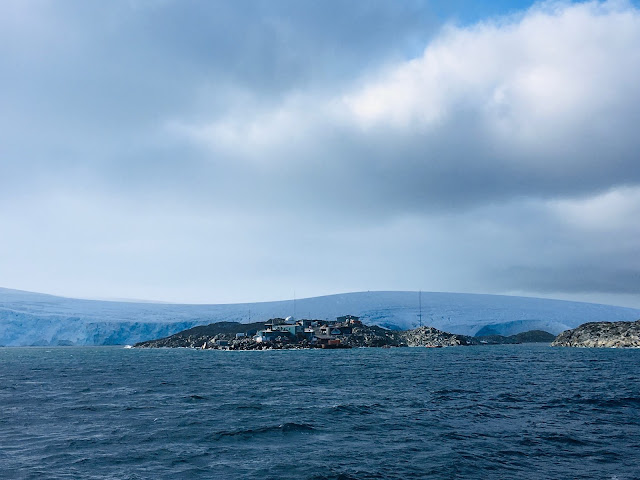 ...and then not at all, as we began the long sail north. It was beautiful, as always, being out on the water as we began motoring up the peninsula. 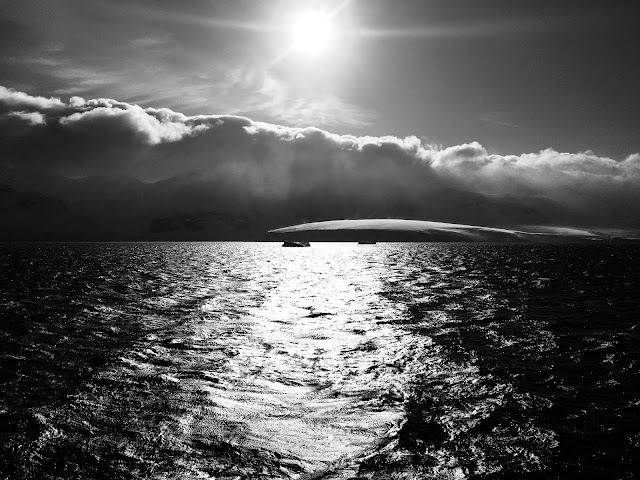 The NBP is big enough that no one ever has to sleep in containers in the hold, thank goodness. I shared this super-cozy room with one of the scientists leaving Palmer. (Hilariously, that TV has cassette tape and VHS players.) And about 24 hours after our departure from Palmer, the seas suddenly started feeling rough and we made our way across the Drake in moderate seas.


I was taking anti-seasickness meds the whole time and so was feeling super sleepy and woozy and the  hours and even the days totally melted together.

On Saturday we made it to Punta Arenas, Chile, but because Chile's borders have been closed to international travelers, we were not allowed to leave the boat. For three more days we stayed on board, doing what we could to offload what could be offloaded without us leaving the vessel, reading, playing games, watching movies, and taking advantage of kind efforts of people on board to entertain us, such as one of the engineers giving a tour of the engine rooms: 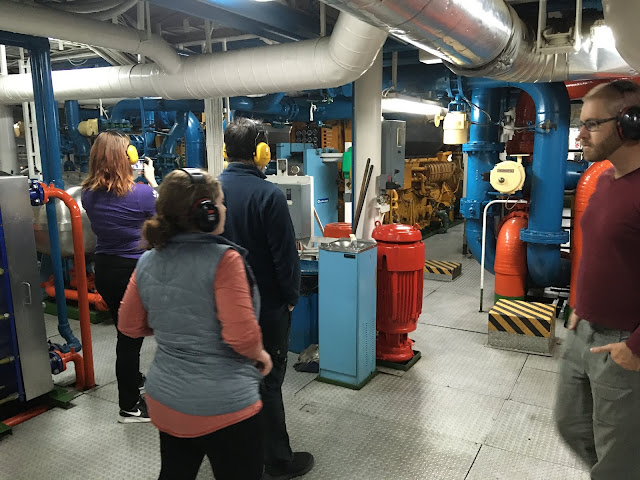 ...gazing at Punta Arenas in the beautiful weather and wishing we could go for walks through town... 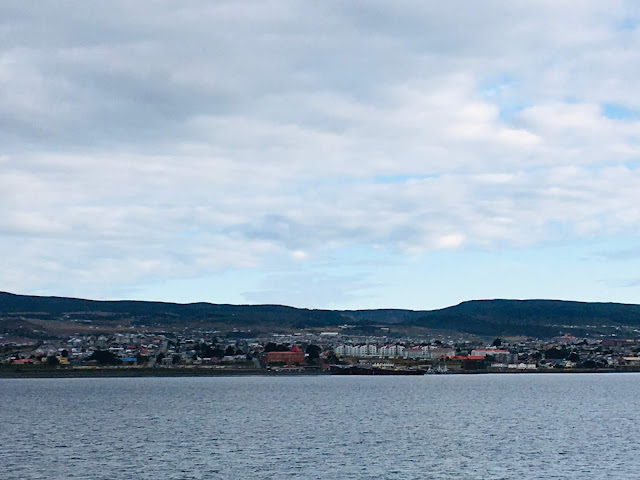 ...said a distant hello to the LMG, docked on the opposite side of the pier, from which position the hazardous waste containers on board were moved over to the NBP for eventual travel north... 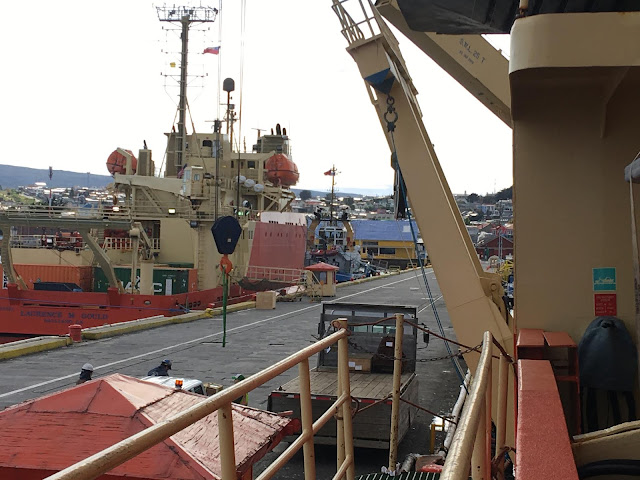 ...and went to several science talks. It was really wonderful to get to interact with the scientists who had been at sea for a couple of months researching the Thwaites Glacier (the fastest-melting area of Antarctica) and to hear presentations on their projects. 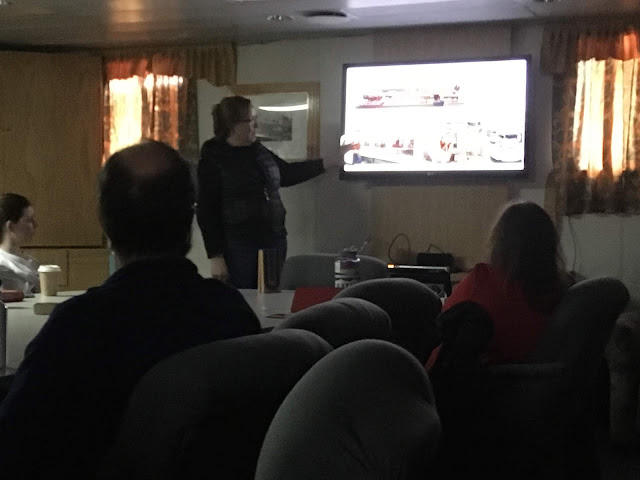 As the days passed, I found myself spending more and more time walking tiny circles around the 01 deck of the NBP just to get some fresh air and movement. (The boat has a gym but the treadmill was broken.) One evening I was out there with this ailing bee, which I felt sorry to see suffering, but which was also a notable sight for me after half a year too far south to see any insect this size. 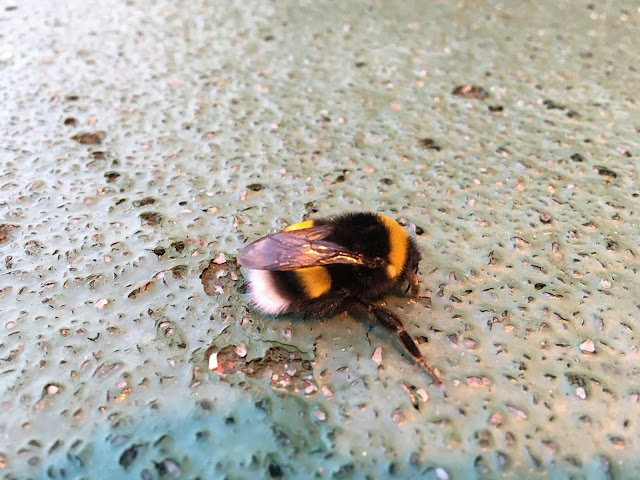 Our last evening on the boat was absolutely gorgeous, making me ache to be able to step off the boat and start the month of exploring Chile I'd been planning as a post-contract adventure. 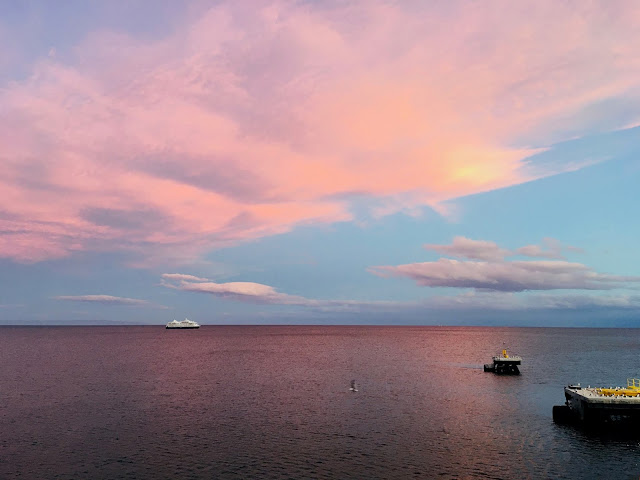 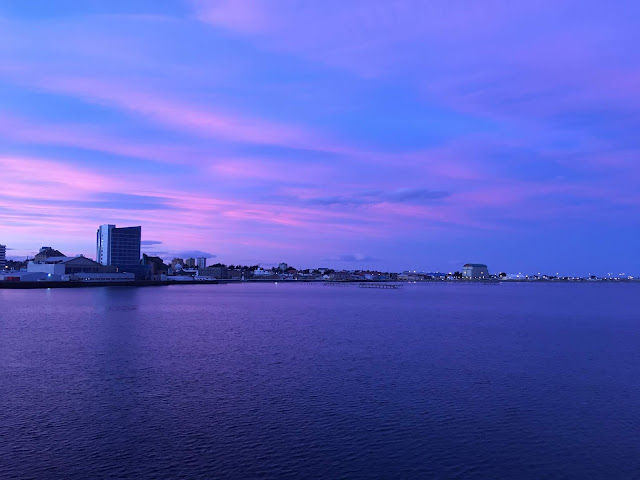 But of course...that is not possible with what is happening in the world right now, and the disappointment of that lost travel adventure is more than balanced with my gratitude that I was able to be heading home to a family that is still safe and healthy and has everything it needs right now.
No comments:

The skies were gorgeous on my last evening at Palmer. I was feeling pretty nostalgic for the place I was still in! I got to hang out in the hot tub with a nice group of people as the sun set, and as darkness set in, they each left until I got to be out there alone, enjoying the beautiful night and feeling so grateful for this experience here. 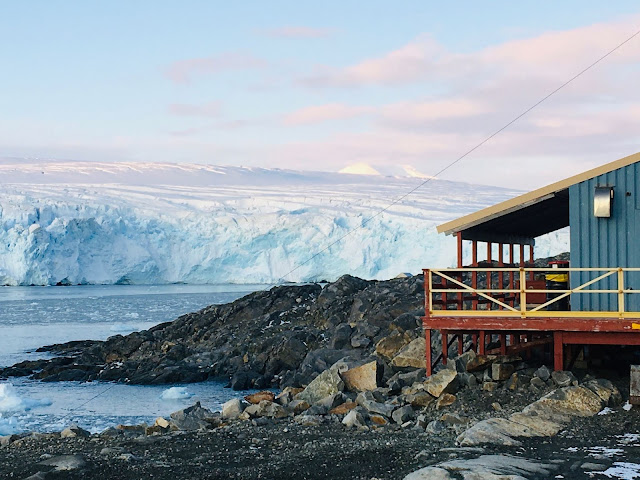 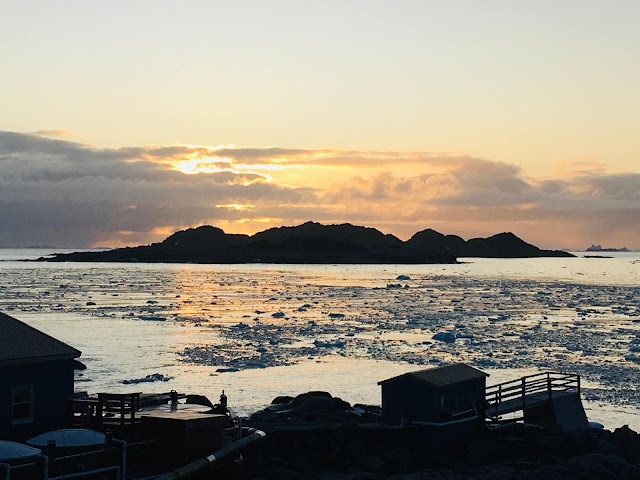 Well, okay! I think that's it for my summer-at-Palmer pictures. Not sure where I'll be when this post goes live...I could be all the way home, possibly. Or depending on how the world is doing, I could still be a ways away. Either way, next time I have a chance to post about the trip home I will. In the meantime, stay well everyone!

Last boat ride of the season

My last Zodiac adventure before leaving Palmer was on a group trip to take the Research Associate to service a water station in the Gosler Islands, which were so fun to explore a little... 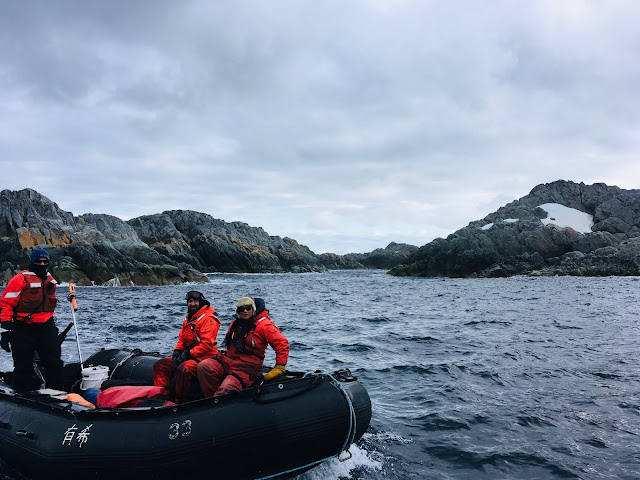 ...and then a visit to Dream Island to place some winter time emergency survival caches. Plus using that as an excuse to take the opportunity to explore a bit around this island that was new to me but definitely lived up to its name. 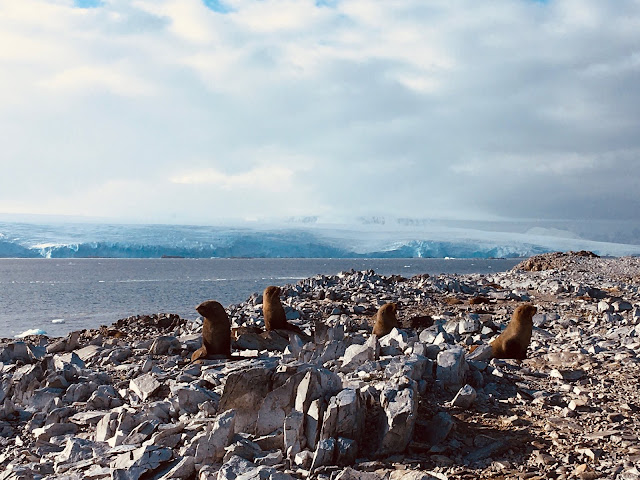 Check out how HUGE this elephant seal is in relation to the three fur seals behind him!! 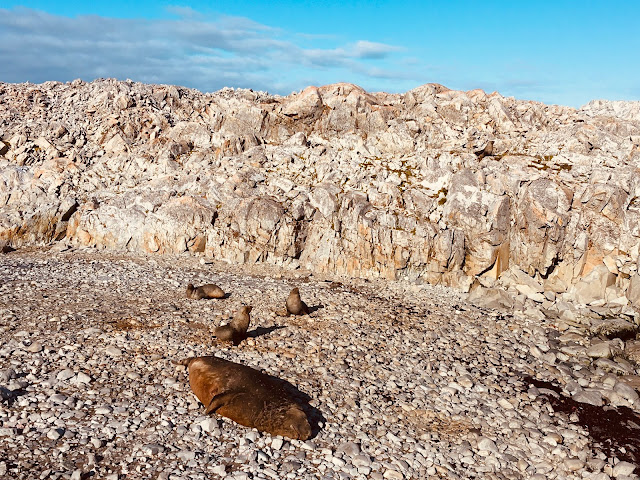 And seeing anything green is such a joy and a treat. Sometimes we rub our faces in it. 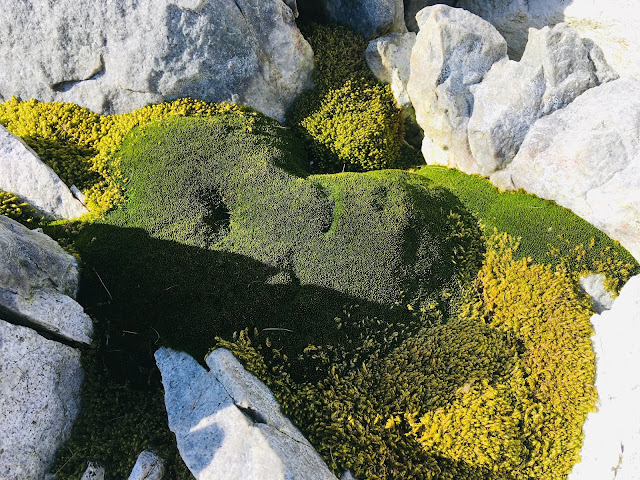 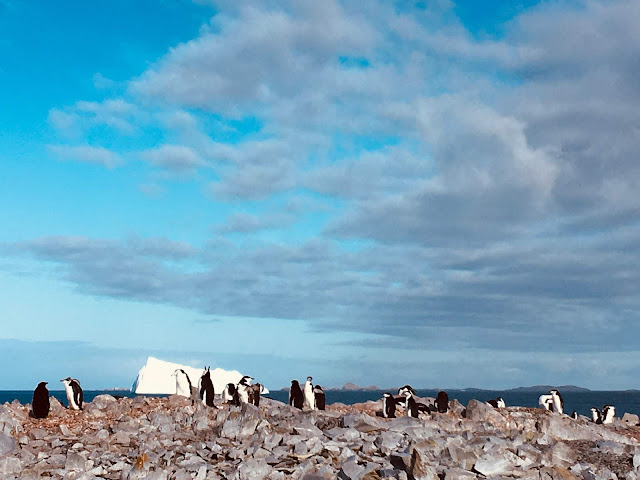 It was a good last outing, over too soon. 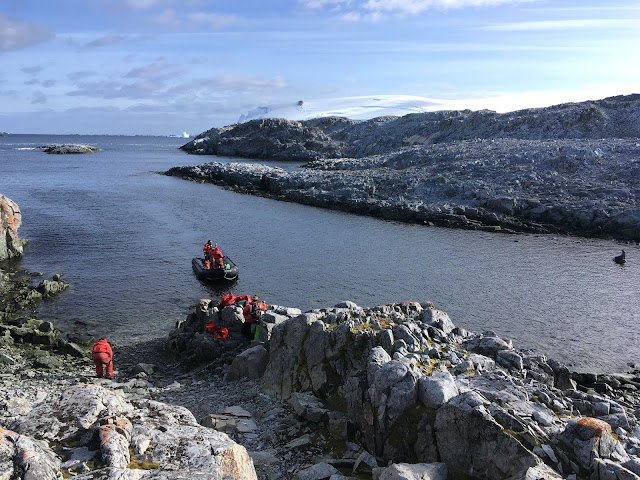 But there was already packing to get back to....
1 comment:

Enter your email to be notified when there's a new post!

World in an Oyster 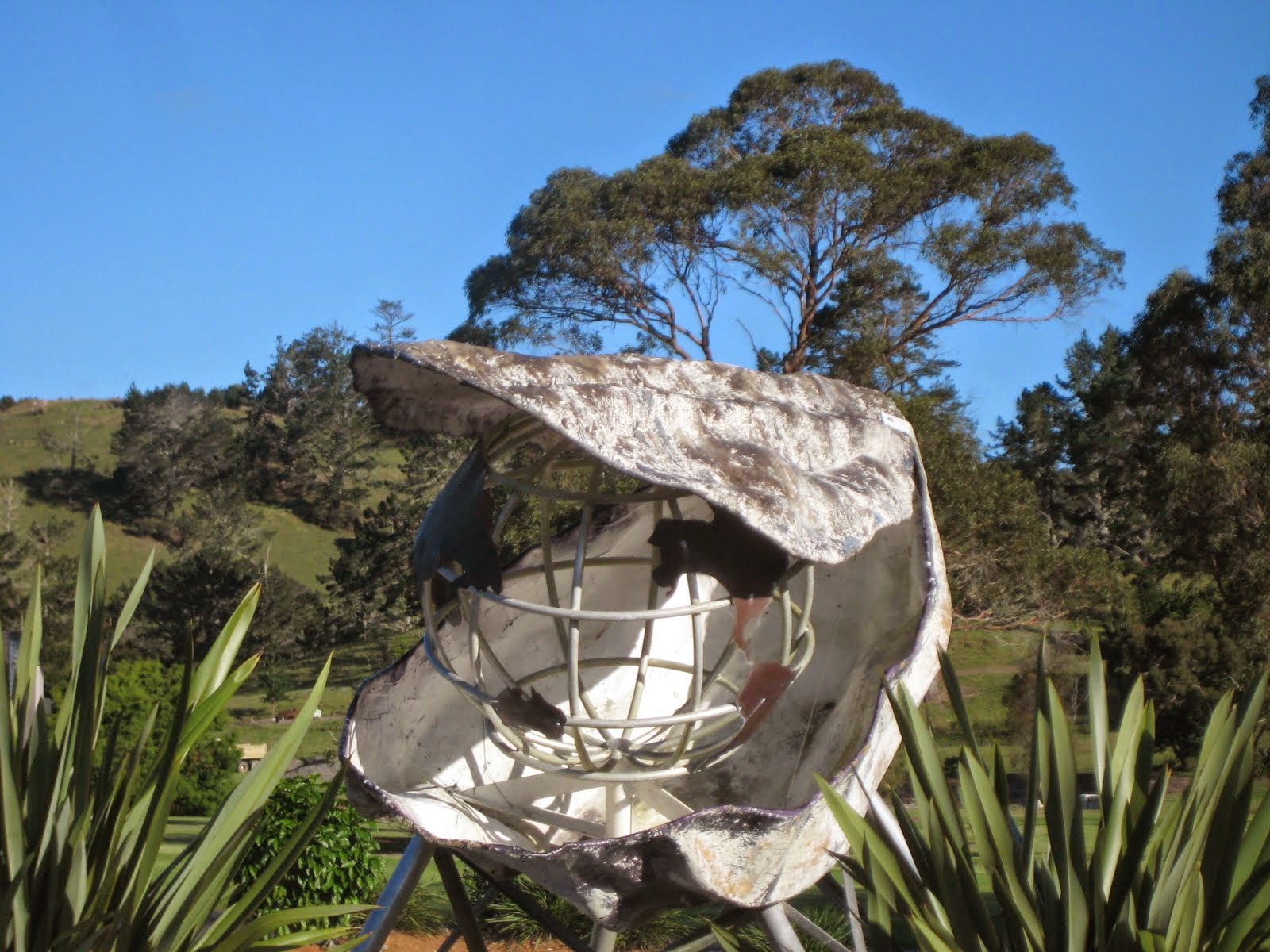